A small miners band, established in 1908 at the Gabriela mine, played at mining festivals and church events. It became well-known in the area and expanded. An essential milestone came in 1943 when Viktor Bystroň accepted the baton.

Victor Bystroň gave the orchestra a solid basis and raised its artistic qualities expanding the repertoir. The number of the members grew and the band started playing outside the region, recording for the radio and taking part in contests and festivals. In 1963, Viktor Bystroň handed over the baton to his son Milan.

Karel Bria accepts the baton and the orchestra experiences a growth never seen before. In 1989, it wins a gold medal at WMC Kerkrade. Apart from this, Májovák records for the radio and television, visits more countries (Belgium, Germany, Russia, Norway, Hungary, the Netherlands, Austria) and plays both in the region and its homeland.

Crucial changes in the economic system after 1989 lead to a crisis within the orchestra and almost to its demise. In 1993, Milan Bystroň returns as chief conductor, the organisation basis changes and the crisis is gradually overcome. Májovák releases its first CD, plays home and abroad (Austria, Germany, Italy, Poland) and has bold artistic ambitions. Jiří Bystroň, Milan Bystroň's son, conducts the orchestra and together with this father expand on the almost 100 years long tradition.

The orchestra is conducted by Milan Bystroň, Vlastimil Blažek and Marek Prášil. It travels to Slovakia, Poland, Italy, Austria (MID Europe Schladming), Norway, France and Slovenia. It regularly takes part in the international competition in Ostrava, where it wins several gold medals and prizes for test pieces and conductor's performances. In 2008, Májovák celebrates its 100th anniversary, and 2009 marks the end of Milan Bystroň's career as chief conductor. The band plays at St. Wenceslas festival of religious music, performs Carl Orff's scenic cantata Carmina burana and Tchaikovsky's 1812 Overture. Since February 2013, the orchestra's residence has been the Bedřich Smetana School of Arts in Karviná, where it co-operates with music teachers.

Ondřej Packan became the orchestra's chief conductor. Májovák successfully played at concerts in Karviná and Ostrava, in July 2014 it participated at the MID Europe festival in Schladming, Austria. In June 2015 it was awarded gold medal at the Ostrava international competition and won the best conductor's performance prize. It also played at Janáček's Hukvaldy, where it honored its two former conductors - Karel Bria and Milan Bystroň.

Milan Bystroň was awarded the mayor's prize for his lifetime contribution to the cultural life of Karviná.
In August, the musicians of Kreisjugendmusikkapelle Biberach, Germany, came to Karviná. Adam Sedlický finished his collaboration with Májovák.

2016 was opened with the traditional New Year's Day concert. Another traditional event was Máj nad Olzou on 1st May 2016. Májovák also played at Landek Park in Ostrava in the spring, the concert was dedicated to two important Czech composers: Julius Fučík (100th birth anniversary) and Václav Nelhýbel (20th passing anniversary). The orchestra played under the direction of Jaroslav Šíp, the chief conductor of the Czech Army Central Band. In June 2016 the orchestra took part in the Karviná Days festival, where it performed film music together with the Permoník Youth Choir. A few days later, the orchestra left for Germany, where it had been invited by Kreisjugendmusikkapelle Biberach, and for La Croix Valmer in France, where it performed in terms of the festival's 20th anniversary. In July, the World Association of Symphonic Bands and Ensembles conference took place in Prague for the first time and Májovák performed in the Valdštejn Gardens of the Senate. In November, Májovák prepared a concert in the leaning church of St. Peter of Alcantara in collaboration with the SPZ choir.

The year 2017 was one of the most successful in the history of our band. On 1st January, the traditional New Year's Concert took place. The audience in the Karviná House of Culture applauded not only to the orchestra, but also its wonderful soloists Veronika Holbová, Peter Svetlík and Adam Grygar. In April, the La Croix Valmer Harmonie from France accepted our invitation and joined Májovák for a concert at the Landek industrial park in Ostrava. The French musicians also performed at the Darkov spa in Karviná. In June, the Ostrava international competition of wind orchestras took place. Under the leadership of Ondřej Packan, Májovák played Pavel Staněk's Four Paraphrases on Bohemian Folk Songs (test piece), Adam Gorb's Summer Dances and Praise Jerusalem! by Alfred Reed. An international jury awarded Májovák prizes for the best conductor's performance, best programme and the orchestra placed in gold band with distinction. In July Májovák set for the WMC Kerkrade in the Netherlands, which is the biggest and most important wind music event whatsoever. On Saturday 22nd July Májovák reached its greatest success since 1989 and was awarded a gold medal. The orchestra played Summer Dances as test piece and Praise Jerusalem! as chosen piece. The last event of 2017 was a concert at the Barbora mine. Jan Nepodal (vibraphone), Jan Soukup (bassoon) and Daniela Grygarová (violin) gave solo performances. The orchestra was joined by the Permoník Male Chamber choir under the leadership of Dominika Škrabalová. 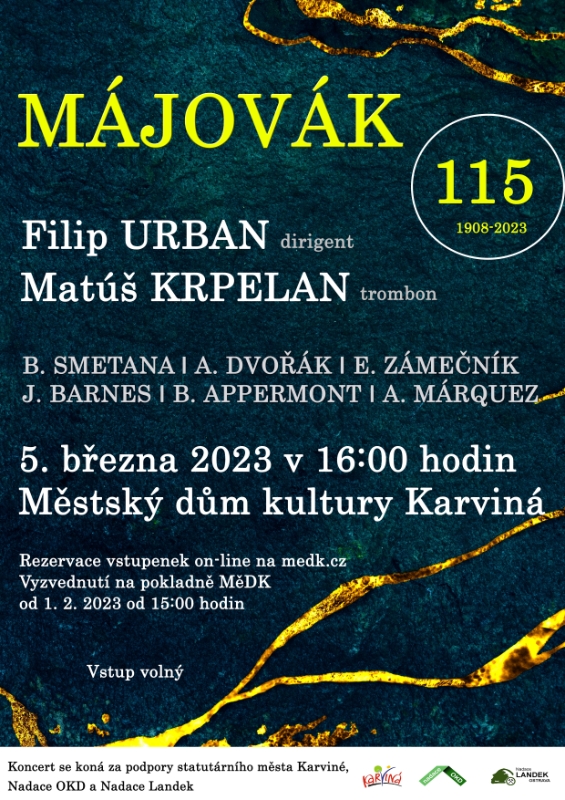